Increasing global population has amplified anthropogenic loading of organic matter to the water cycle, and increased the rate of incidental water reuse, both of which are core concepts of my future work.

The Hanigan Lab focuses on environmental organic and inorganic chemistry and process based water treatment.  An in-depth description of a few recent focuses is below, but, the current focus of the lab is on:

1) Direct/indirect Potable Reuse.  As our supplies of pristine drinking water sources dwindle, we will have to rely on less conventional sources of water, such as wastewater.  If the International Space Station does it, why can't we?  The challenges we specifically wish to address include removal of organic and inorganic constituents such as pharmaceuticals, heavy metals, and pathogens.

2) Point-of-use Water Treatment: The goal of this work is to reduce the loading of pharmaceuticals and other anthropogenic chemicals to the environment.  Rather than attempting to remove these chemicals at a wastewater treatment plant after they have been significantly diluted, we aim to remove them from the waste stream immediately after they are excreted from the body.

3) Water as a Medium to Partition and Remove CO2 from the Atmosphere:  The greenhouse gas CO2 naturally partitions to the aqueous phase.  We aim to use novel materials to sequester CO2.  This will reduce the concentration of CO2 in the water and will drive further partitioning, removing CO2 from the atmosphere.

4) Anthropogenic Chemicals in the Environment.  My broad interest is in the sources, fate, and impacts of anthropogenic chemicals in/on the environment. Research focuses on developing new analytical tools to quantify humankind's influence, and engineering tools to mitigate impact. 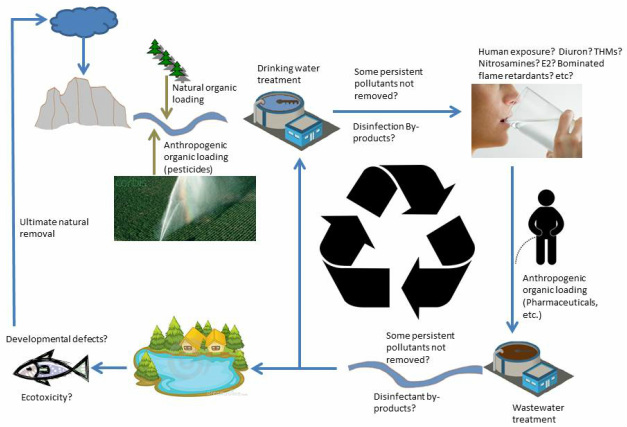 Introduction - Past and Current Research

N-nitrosodimethylamine (NDMA) is an emerging contaminant of concern that has been listed by the Environmental Protection Agency as a priority pollutant in drinking water. Several states have already set action levels on NDMA and Canada has set a 40 ng/L MCL based on 10^-5 lifetime cancer risk. NDMA has also been regulated in the state of California, where a public health goal has been set at 3 ng/L based on a lifetime cancer risk of nearly 10^-6.

Formation of NDMA in drinking water occurs from a reaction between chloramines (disinfectant) and organic nitrogen (mostly tertiary amines).  To mitigate formation of NDMA, we must remove the precursors, switch disinfectants, or remove NDMA itself, after formation.  NDMA forms slowly in the distribution system and is somewhat polar, rendering post-formation removal difficult.  In addition, many utilities employ chloramines to mitigate formation of regulated trihalomethanes, and therefore are unable to switch to other chlorinated disinfectants.

Staying in the broad area of ecosystem and human environmental health, some of our research investigated the ecological impact of engineered nanomaterial use.  Nanomaterial use has been increasing exponentially over the past few decades and although there appears to be little impact currently, scientists are unsure how their increased use will influence the associated risk.

Per- and polyfluoroalkyl substances (PFASs) are released to the environment through several pathways, including use as aqueous film-forming foams for fire-control by the U.S. military. The U.S. Environmental Protection Agency has set health advisory levels for two PFASs based upon environmental persistence and adverse health outcomes and multiple U.S. military bases and airports are subsurface contaminated with PFASs. Sampling and quantifying PFASs is required to remediate contaminated sites, but the process is time-consuming, requires costly instrumentation and expertise (LC-MS/MS), and fails to capture many organofluorine transformation products and precursors with likely health impacts to exposed aquatic species and humans. Our goal is to develop and validate robust, field-ready instrumentation and methods to quantify total organofluorine.  The method is based on combustion of PFASs to HF, and measurement of HF.

Wastewater from domestic and industrial sources is a resource for urban and peri-urban irrigated agriculture because it can provide both water and nutrients which are critical inputs to food production.  But wastewater contains anthropogenic chemicals including pharmaceuticals and endocrine disrupters, which may pose a risk to grazing animals or humans.  Research has been conducted in greenhouses and at bench-scale to assess these risks, but little research has been conducted at the field-scale with reclaimed wastewater used as the irrigation water.  Our goal was to identify chemical contaminants in reclaimed water used for urban and peri-urban irrigated agriculture (forage crop and animal production); determine pathways (namely, water, soils, and sediments) of contaminant entrainment into agricultural products; determine associated health risks; and develop strategies for mitigation of those risks over the agricultural production chain, particularly focusing on reclaimed water production and point-of-use

Removal of N-nitrosodimethylamine Precursors from Drinking and Wastewater

We attempted to remove NDMA precursors from wastewater using powdered and granular activated carbon (PAC and GAC) without knowing their exact chemical structure, using NDMA formation potential (FP) as a surrogate for precursor removal.  In addition, we attempted to sorb some NDMA yielding pharmaceuticals to PAC.  We found that NDMA FP removal was always better than dissolved organic carbon and UV254, indicating potential for NDMA precursors to act as "trace" organics.

Contribution and Removal of Watershed and Cationic Polymer N-nitrosodimethylamine Precursors

Some cationic water treatment polymers (coagulant aids) are among the approximately 60 known NDMA forming chemicals.  We examine the yield of eight polymers and their affinity for PAC and GAC.  As expected, the charged structure of dissolved polyDADMAC inhibits adsorption.  Polyamine was sorbed well, potentially due to the inclusion of repeating OH groups, allowing the polymer to participate in hydrogen bonding with activated carbon surface groups (phenolic, carboxyl, carbonyl).  We examined a theoretical scenario where treatment options are compared with respect to meeting potential treatment goals for NDMA formation resulting from polymer use, wa

Conceptualization of NDMA precursor contribution and removal in the pilot plant.

Isolation and Identification of Authentic NDMA Precursors in Surface and Wastewaters

NDMA precursors present in the watershed (water treatment influents) are typically associated with wastewater effluents.  Soluble microbial products have low or zero NDMA yield and therefore the current school of thought is that most NDMA precursors associated with wastewater are anthropogenic chemicals (pharmaceuticals, personal care products, pesticides, etc. all have NDMA yield).  While a handful of anthropogenic chemicals have been identified as NDMA precursors with varying yield (<1% to 98%), no research to date has focused on detection of these chemicals in authentic waters.  In addition, no research has focused on identification of unknown precursors in authentic drinking water plant influents.  Therefore, we conducted preliminary research where we were able to capture and elute 40% of NDMA precursors.  We successfully identified several NDMA precursors in the isolates and published a manuscript on the contribution of upstream methadone use to NDMA formation.

Sunscreens contain either an organic chemical UV filter (oxybenzone and others) or a physical sun barrier, typically nano-scale TiO2 or ZnO because these nanomaterials are nearly transparent to visible light when applied properly.  Several organic chemical filters have been shown to cause photo-sensitization of the skin when exposed to light (likely through a reactive oxygen species [ROS] pathway) and are known to cross the epidermis into the blood, where they are eventually hepatically cleared. On the other hand, both TiO2 and ZnO are photo-active, which produce DNA damaging ROS when exposed to UV light such as that from the sun.  Proprietary formulations of nano-containing sunscreens aim to either cease reactive oxygen species from being formed by coating the TiO2 or ZnO in aluminum or silica polymer, or quench the ROS as it is produced, presumably before it damages DNA.  However, environmental release and transformation of these particles can cause them to be separated from their aluminium shell or ROS quencher, and produce environmental ROS that likely causes stress to aquatic ecosystems.

To-date, research assessing the impact of physical barrier (nano) sunscreens on ecosystems has been conducted using nanomaterials purchased from manufacturers with no guarantee of environmental relevance (use in actual sunscreens).  Therefore, I have developed a method to extract nanomaterials from sunscreens.  As of December, 2015, I am working to characterize these particles at Arizona State University using TEM with energy disspersive X-ray (EDX), single particle inductively coupled plasma mass spectrometry (spICP-MS), and laser induced breakdown spectroscopy (LIBS).  In the near future I will work with collaborators at Oregon State University to compare the zebrafish toxicity and developmental stress caused by 10 nano sunscreen extracts to 5 FDA approved and 5 EU approved active organic sunscreen chemicals. 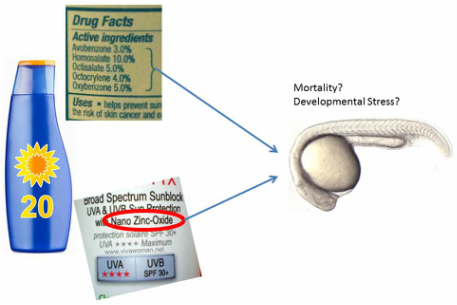